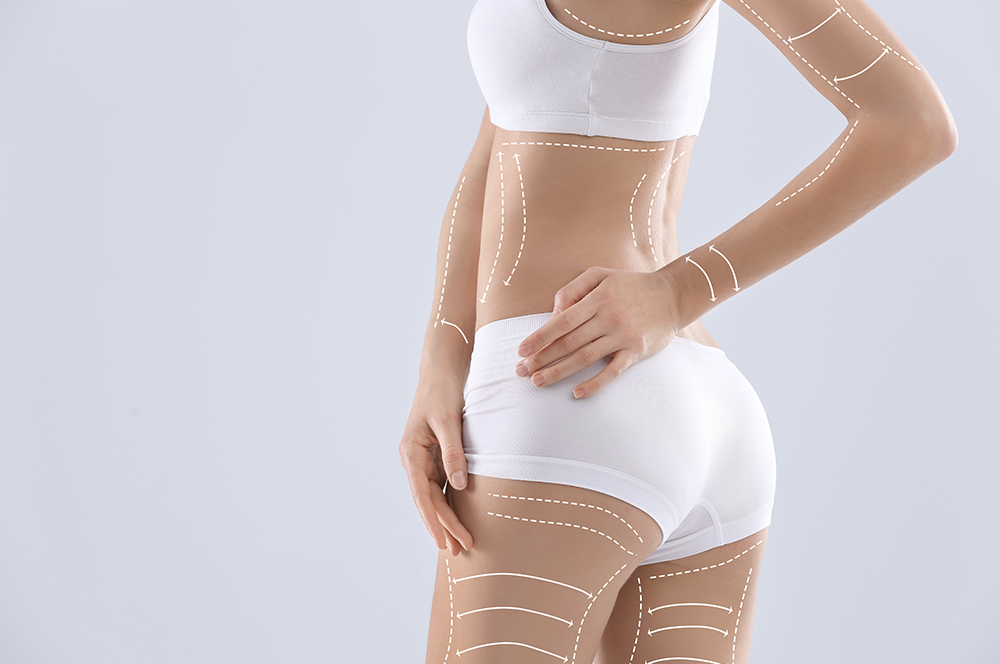 Body types can change for a variety of reasons, from pregnancy and breastfeeding to bariatric surgery-related excessive weight loss, aging, and gravity. For those in good general health, body contouring procedures are a viable alternative to tackle those areas resistant to traditional diet and exercise regimens, helping to achieve a more toned, sculpted physique via cosmetic surgery.

Options range from liposuction and SmartLipo™ to tummy tucks, as well as body, arm, neck, buttock and thigh lifts. Depending upon your specific area of focus and medical history, some of these procedures can be performed in conjunction with one another; at times, during the same appointment. Patients should schedule a consultation with a board-certified cosmetic surgeon to discuss their options and determine which are most suitable.

THE FOLLOWING IS AN OVERVIEW OF SEVERAL OF THE MOST POPULAR BODY CONTOURING PROCEDURES:

One of the most popular cosmetic surgeries in the United States, liposuction is intended to sculpt the body by removing resistant pockets of fat and ensuring that these areas will not continue to accumulate fatty deposits in the future. The process generally falls under the “tumescent” classification, which uses a solution composed of saline. Once this is introduced into the system, your plastic surgeon will employ one of several methods—SmartLipo™, suction-assisted liposuction, power-assisted liposuction, or ultrasonic-assisted liposuction.

An advanced liposuction procedure using laser energy to melt away fat in areas including the waist, chin, thighs, hips, buttocks, arms, face, and back of neck via a technique known as laser liposculpture. This minimally invasive procedure melts away targeted fat cells, which are then suctioned out, thereby sculpting and smoothing the body. It results in minimal bleeding, as well as faster healing and recovery times.

Also known as abdominoplasty, tummy tucks are designed to help flatten the abdomen by removing excess fat and skin while tightening the underlying muscles. This process involves making a small incision across the lower abdomen and the belly button to remove old scars—such as those from a C-section. It is also available as a “mini abdominoplasty” for patients whose problem areas are limited to the lower abdomen. A temporary drainage tube may be inserted following surgery.

These procedures are performed to remove excess skin from the back and abdomen, often resulting from significant weight loss due to diet, exercise or bariatric surgery. Sometimes completed in conjunction with breast lifts, arms lifts and liposuction, the goal of a body lift is to retain the proper proportion by improving the shape and tone of the underlying tissue. Due to the extensive incisions required, many patients elect to split this process into two smaller procedures in the interest of both safety and comfort.

Also known as brachioplasty,  arm lifts are used to remove the excess skin which tends to develop on the underside of the upper arm. While a traditional procedure can leave a rather sizable scar, the minimal-incision version is far less invasive. Results are immediately visible, and become more apparent once the initial swelling and bruising subsides. Patients are traditionally able to return to their regular schedule the same day, with the use of a compression garment.

These procedures are available in two variations—cervicoplasty, which removes excess skin, and platysmaplasty, which tightens loose neck muscles. Through small incisions made behind each ear, along with a third under the chin, this surgical procedure works to restore a smoother, firmer neck. In most cases, mild bruising and swelling results, which gradually subsides over time. A tight feeling may remain for several months.

Buttock lifts are intended to produce fuller, more rounded buttocks by harvesting excess fat from areas including the abdomen, back, hips, and waist via liposuction and transferring it through small syringes connected to micro cannulas (tubes). Following the procedure, a control garment must be worn for two to four weeks, to to minimize any subsequent swelling and discomfort.

These are designed to tighten excess skin on the upper leg area, producing a slimmer, more contoured shape. They are performed by making an incision in the groin creases, the length of which is dependent on the size of the treatment zone. Inner thigh lifts typically stand alone, while outer thigh lifts can be combined alongside a tummy tuck, commonly referred to as an “extended tummy tuck.”

Although every patient is different, most begin to see improvements immediately, with full results continuing to set in over a period of two to three weeks. Recovery times can vary from person to person, but with the use of compression garments where recommended and a brief period of bed rest, the majority of those who undergo body contouring procedures are able to return to their normal routines within a week or two of surgery.

FOR FURTHER INFORMATION AND TO SCHEDULE A CONSULTATION WITH OUR BOARD-CERTIFIED PLASTIC SURGEONS, CONTACT COSMETIC SURGERY OF NEW YORK, TODAY.

Selecting the Breast Surgery Best for You

Facial Rejuvenation: The Key to Your Youth

Stay up to date on news, receive special promotions